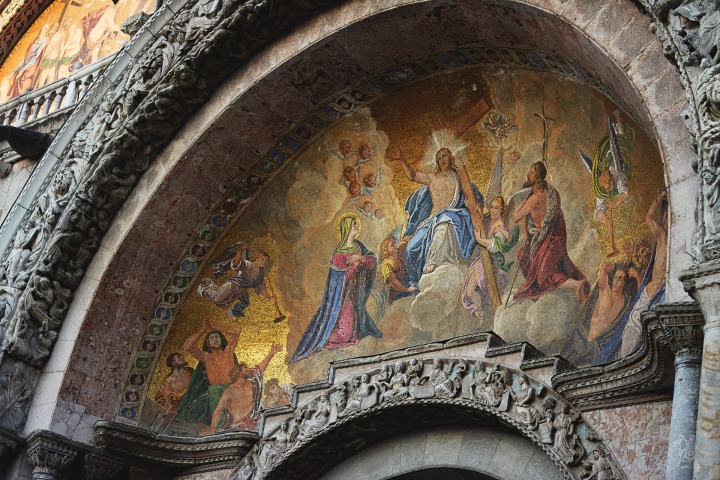 “It is finished.” / Marriage

It is Holy Saturday and Jesus lies dead in the tomb.  His disciples have fled or hide in fear, the Jewish leaders enjoy their Sabbath rest with relief, and Pilate wonders if he made the right choice; all in the absence of Jesus.  The Earth is still as God lies in the darkness of the tomb.  Is this it?  Is it truly finished as Jesus proclaimed with His final breath?

I can only imagine how perplexed and lost many of the disciples must have been on that Saturday.  As they sat together, forsaken, they probably recalled Jesus’s words to them from that last meal they shared together. “I will not leave you desolate; I will come to. Yet a little while, and the world will see me no more, but you will see me; because I live, you will also live” (Jn 14:18-19).  Jesus has left them desolate… the world cannot see Him, but neither can the disciples!  What could He possibly have meant?  How can Jesus live in us if He is dead?

“Let not your hearts be trouble, neither let them be afraid” (Jn 14:27).  The disciples recall the command given by Jesus at that same meal.  And with great hope, they remember where Jesus has gone, “In my Father’s house are many rooms; if it were not so would I have told you that I go to prepare a place for you?” (Jn 14:2).  Jesus has gone to His Father’s house to prepare a place for us.  This a reference that every man sitting in that room would understand.  It is a reference to marriage.

Jesus has left the disciples to go to prepare a place for them in His Father’s house. This is exactly what the bridegroom does for his betrothed before their nuptial consummation.  Jesus speaks to His disciples as if He were marrying Himself to them.  This makes sense because Jesus has spoken of Himself many times as the Bridegroom.  Who could be the bride other than His creation?  Jesus intends to marry Himself to us, but what does that look like?

We see from the beginning that God has intended this plan of divine marital union between Himself and creation.  God created Adam first so he could prepare a place in the Garden for his wife Eve.  The two were not one in the same, but rather, were made complimentary so that they could become one (Gn 2:24).  God ordered the world towards unity made manifest in His creating them male and female.  We also see this on the seventh day when God rested with His creation.  God lies in communion with His creation and, further down the road, gives the command to keep the Sabbath Holy for he knows that “the Sabbath was made for man” so they could come to know union with God (Mk 2:27).  God has intended to marry Himself to creation since the beginning, but why is it taking so long?

Sin.  It breaks our intended unity with God and with each other.  We see this immediately when Adam and Eve cover themselves out of shame of nakedness (Gn 3:7).  Sin has (literally) created a barrier between that which was intended to unify.  The same thing can be said about the relationship with God and His creation: sin has created a barrier that keeps us from being “one flesh” with God.  We see throughout the Old Testament that God pursues His creation, yet sin continues to thwart our hearts from realizing His embrace.  Sexual sin specifically makes this manifest.  Where there is bad sex in the Old Testament, there are bad relationships with God (Ham, Hagar, Lot, Solomon).  God is showing us that our intimate unity with one another is intimately connected to our intimate unity with Him.  God wants to teach us intimacy so as to lead us to intimacy with Him.

God uses earthly marriage as a sign (sacrament) to point to His intention for His creation.  It is no wonder that Jesus’s first sign happens at a wedding.  God has been courting us throughout salvation history and it comes to climax on the cross.  Those of you who are married know that marriage is not “compromise” or “50/50” as it is often said today.  Marriage is sacrifice and 100/100.  In marriage, we are called to give all of ourselves (mind, emotions, body, soul, desires, and fertility) to our spouse.  There is nothing held back.  Spouses are called to become subordinate to the will of the other, in love, so to become “one flesh.”  However beautiful this is, it is still but a sign for what God intends for us.

Jesus’s final breath on the cross announces that “It is finished.”  The consummation of God and His creation has been completed through Jesus giving all that He is for the sake of His betrothed.  Through His death, Jesus cements Himself as the Bridegroom of His creation who now keeps and tills the Garden where we live.  He has prepared us a place in His Father’s house where we will come to full union with Him.  He has crushed the barrier of sin that stands in the way of our intimacy.  He has not left us desolate, but sent us his Spirit so that we “will know that I am in my Father, and you in me, and I in you” (Jn 14:20).  As a loyal spouse He tells us, “I am with you always” in every tabernacle throughout the world.  Jesus proclaims that the consummation is finished, but the marriage has just begun; We get to experience this marital intimacy (becoming one flesh) every time we receive His body and blood, given for us on the cross, in the form of bread and wine.  We do this in hope of the eternal wedding feast in heaven where Jesus has prepared a room for us.  He gave all that He is to us… As spouses we are called to do the same in return so that the two may become one.